Though exporting the Norton in the Netherlands was only a matter of 15 minutes, importing the Norton in France took somewhat a bit longer; 4 months …
After having obtained the approval of the FFVE, having obtained the missing Quitus Fiscal and all I needed to do was making the request by the ANTS, it became more complicated; it all needs to be online, using their website, which I suppose hasn’t really foreseen the request of a vehicle that is as a) a motorbike (and not a car), b) importation and c) requesting a collectors mention. All three at the same time, which would have been my corresponding case, didn’t go as smoothly; it already started with the elements/papers/proof the website requested (some applied to cars, some papers are normally impossible as the Dutch RDW took them in upon export and you don’t have them any longer) and needed elements the website did *not* request.

Which of course led to a 4 weeks wait and following answer that my request was incomplete (…). After some exchanges back and forth the "missing" elements were provided. And behold, finally, the request was approved and I got my license plate number and corresponding papers.

Just that… The paper I received was incorrect and wasn’t what I requested.
As everything has to be done through their website, simply calling them to signal an error isn’t possible; the foregoing request was handled, delivered and closed. So only possibility is to open a new request and refer to the previous request number to signal the error. Again a 4 weeks wait (…)

I had already called their helpdesk meanwhile who at first explained that there was no error, I had omitted to provide the FFVE statement (?). No no, please, look closely, it should be really there in the ticket. Ah, yes, I see, they must have made a mistake.   (Nooooo ??)

Thing is, though I had the license plate number and paper, I still wouldn’t be able to use the bike; now it was, on paper, just an old bike, from before 2004, which… Is no longer allowed on the road in and around Paris due to anti-pollution measures. The paper was missing the important mention that it concerns a historical collector’s item (for which exceptions are made). Neither could I have requested to produce the physical license plate. It makes all the difference.

Then finally, I received just an SMS from the ANTS inviting me to pay for the requested modification. When I connected, I had to pay 0,00 euros (and was already scared their website would error on it, as it is difficult to pay 0,00) but low and behold, that wasn’t an issue, it simulated the payment request and passed on to the next stage, new paperwork in production 🙂
Three days later I received the new paper, now all is in order and I could request the physical license plate :)))) 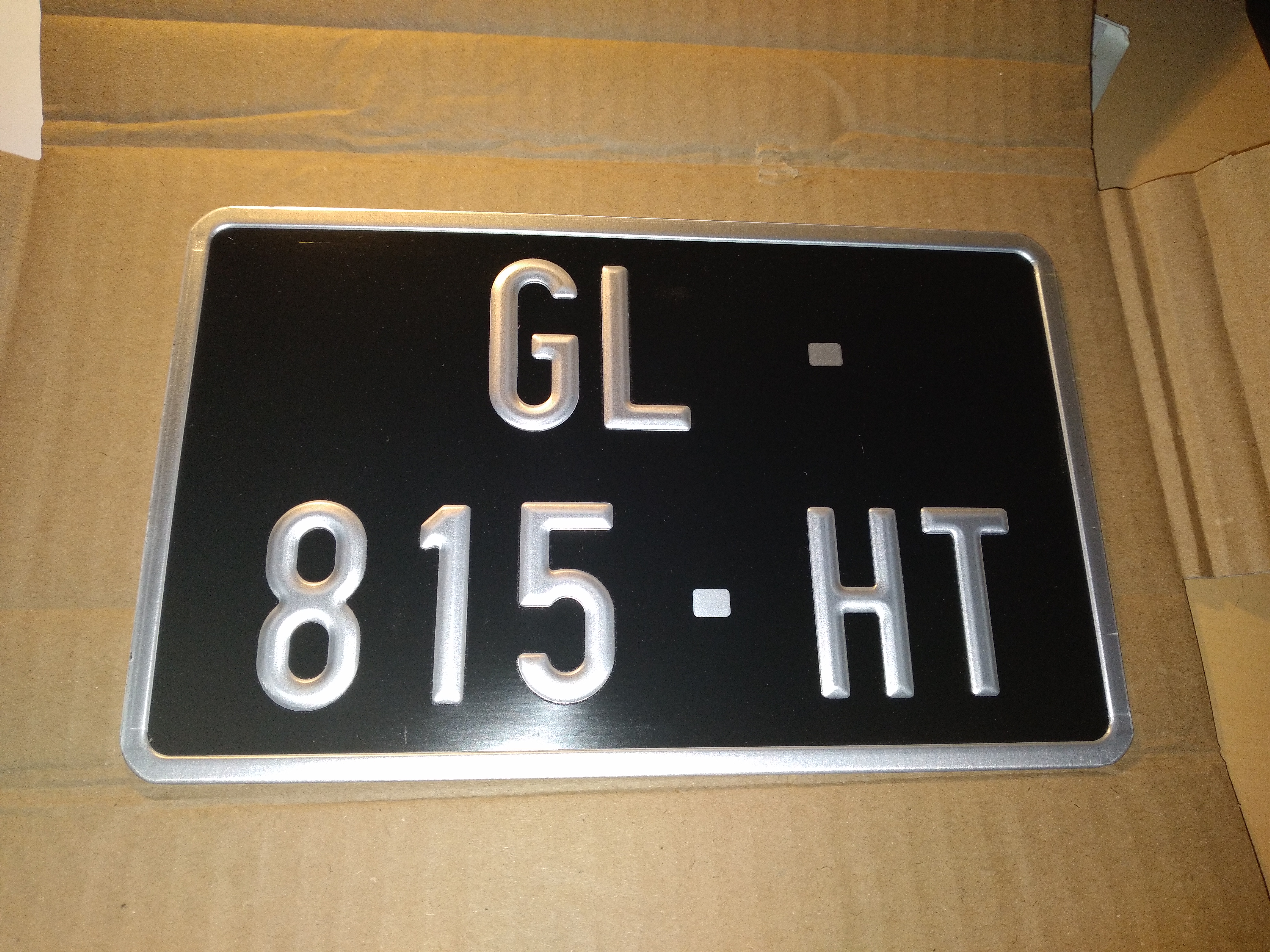 Then I still needed to find an insurance for the Norton. Most regular insurances don’t provide insurance for historical vehicles. Which was my insurance company’s case. I had already asked the Norton Owners Club France members for advice. The Norton now has insurance since 27/01/2023. 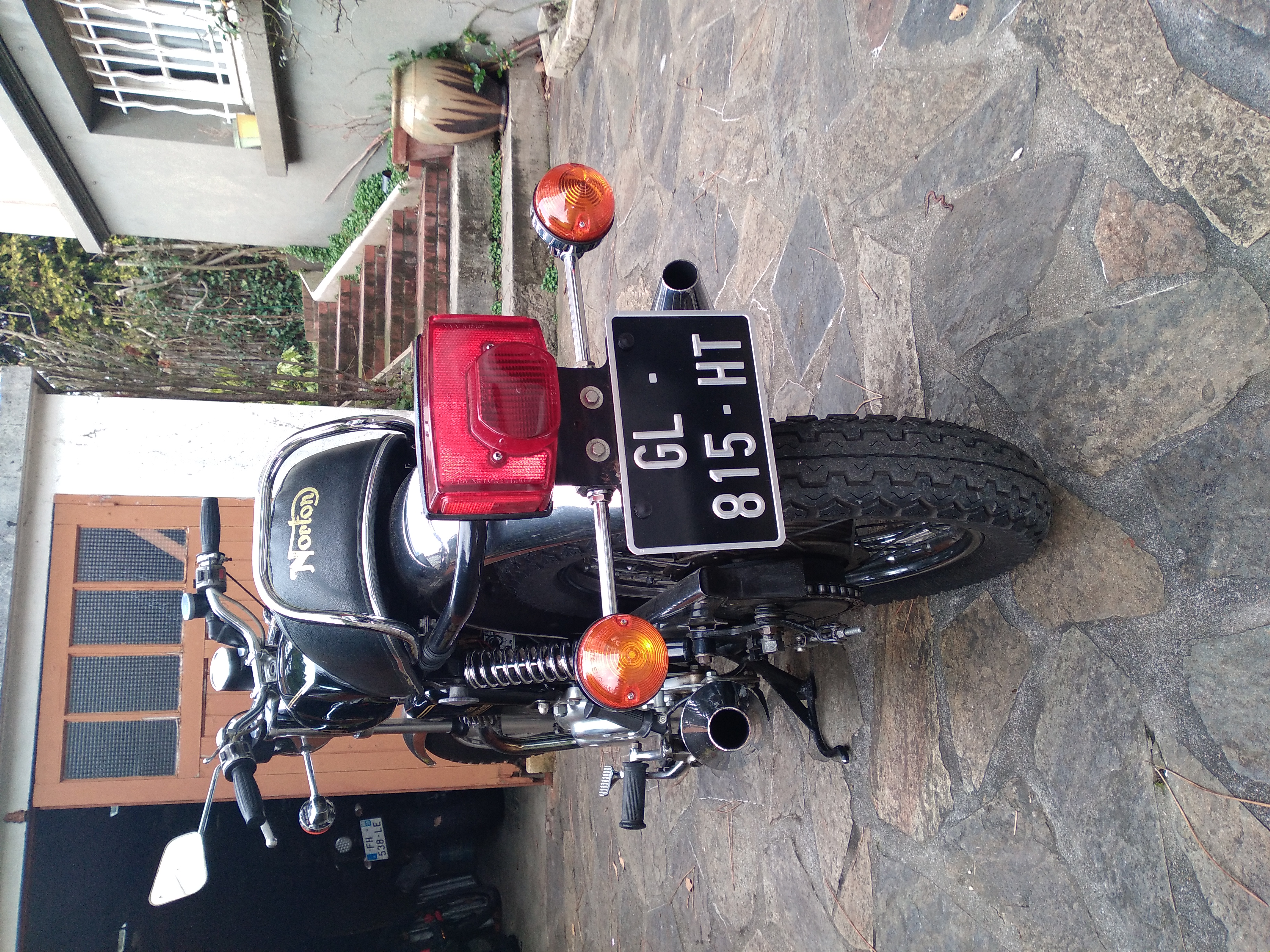 As it had been 4 months I was eager to go for a short ride, despite the cold. The Norton started at the 4th or 5th kick, no kicking back, no strange things. Though the Norton is now French and no longer Dutch, she still performed well. Only the tires needed some air. The only "incident" I encountered on the way was the mirror; 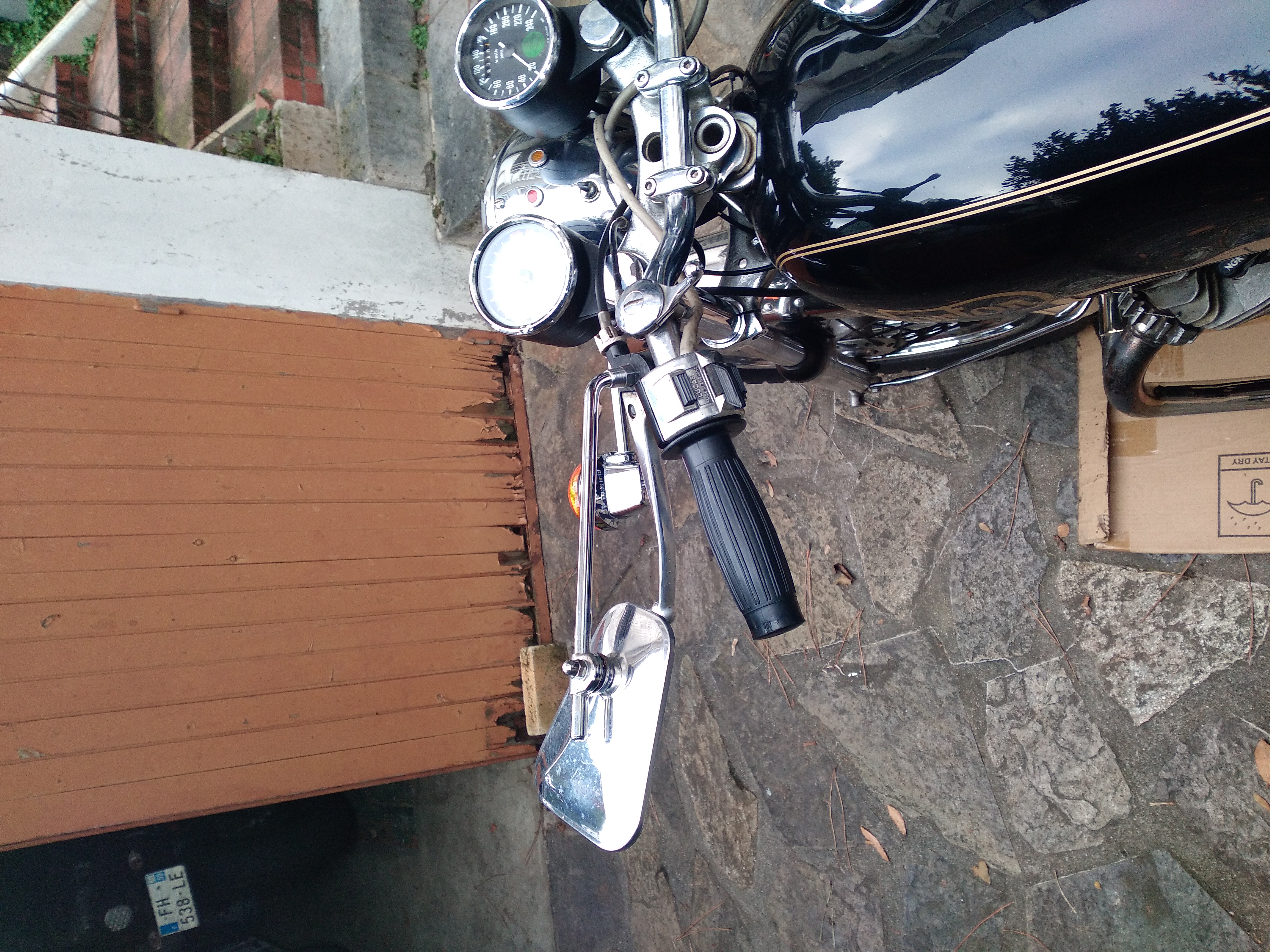 But that was quickly fixed 🙂

Some may know, but I have the Dutch nationality. When I purchased the Norton from the motorbike collector in the Netherlands, I couldn’t put the Norton on my name as I’m living abroad. The temporary solution was to put the Norton (and its insurance) on name of my mother. Curiously she doesn’t even have a driving license for a motorbike, something they don’t check. But I’ve always known that this situation couldn’t last; if something was to happen to her I would have no place to go with the Norton (administratively). So exporting and re-importing the Norton, putting the Norton on my name in the process, had always been the plan but just took a bit longer than initially thought. Later there was Covid, travel restrictions … And the agency I had to go present myself in the Netherlands to arrange the export was closed due to Covid anyhow.

Not something I was looking forward to but what has to be done, needs to be done. Knowing also that I won’t be able to use the Norton for a while as long as she isn’t re-imported and has a new license plate. 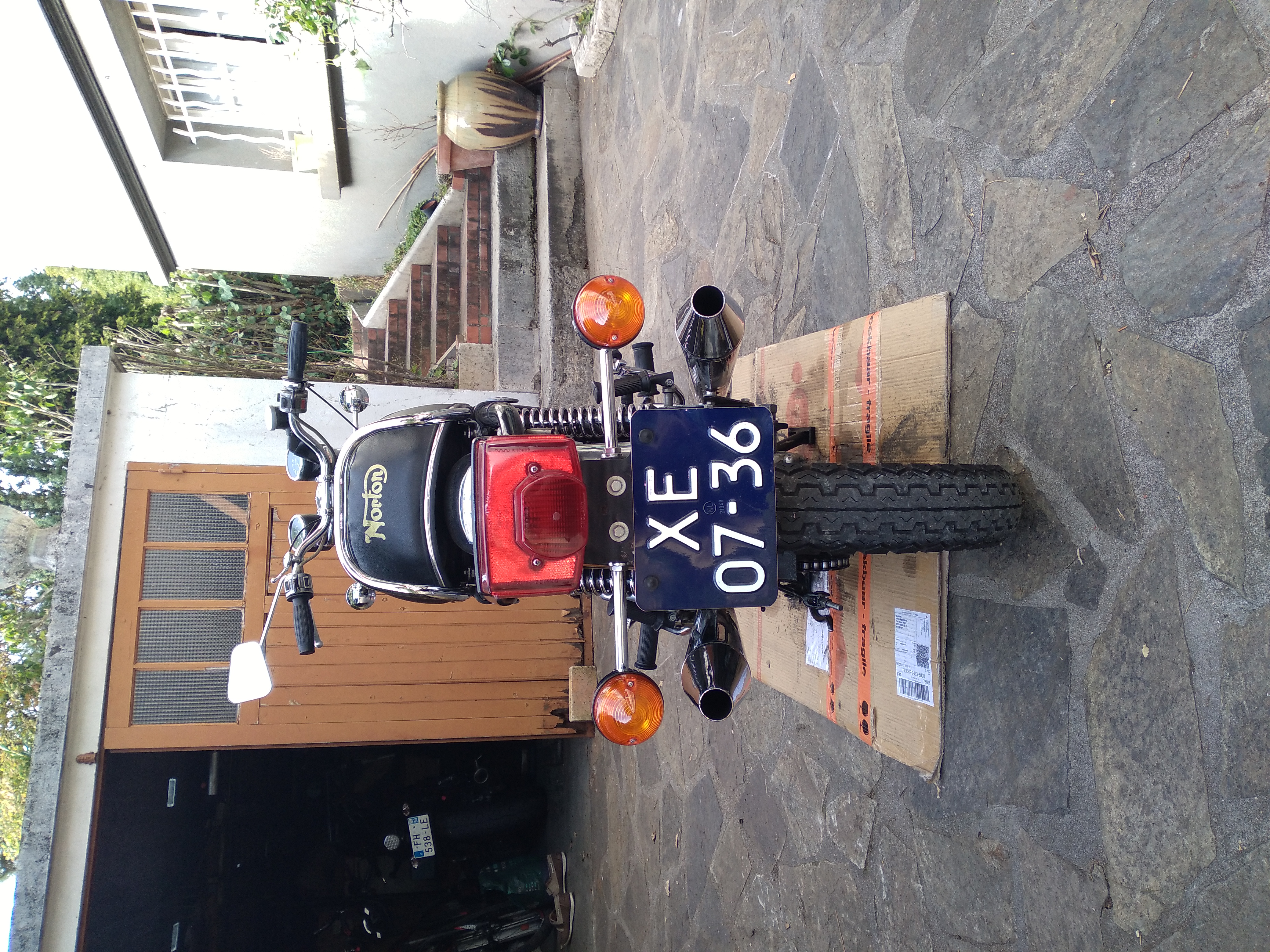 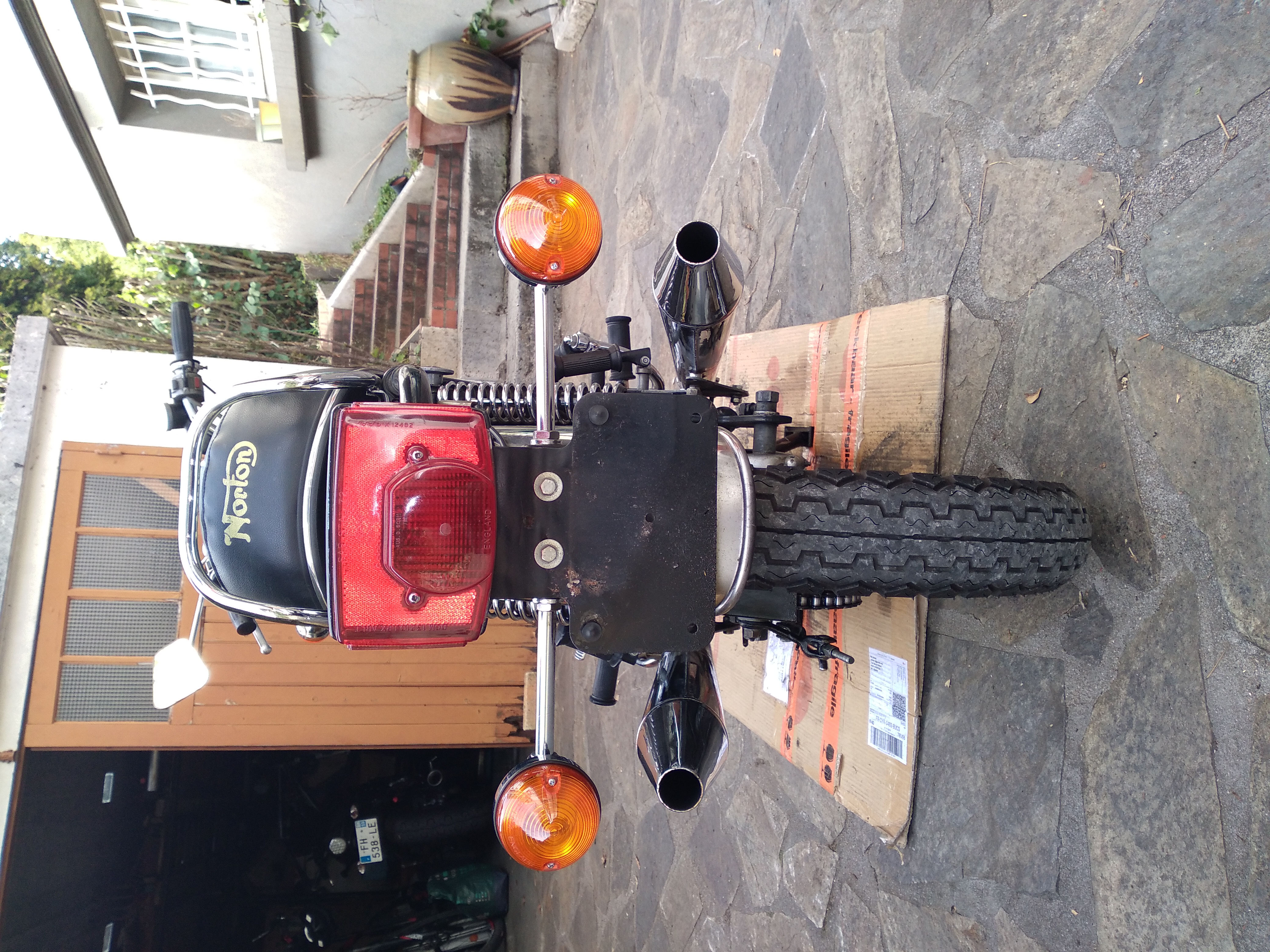 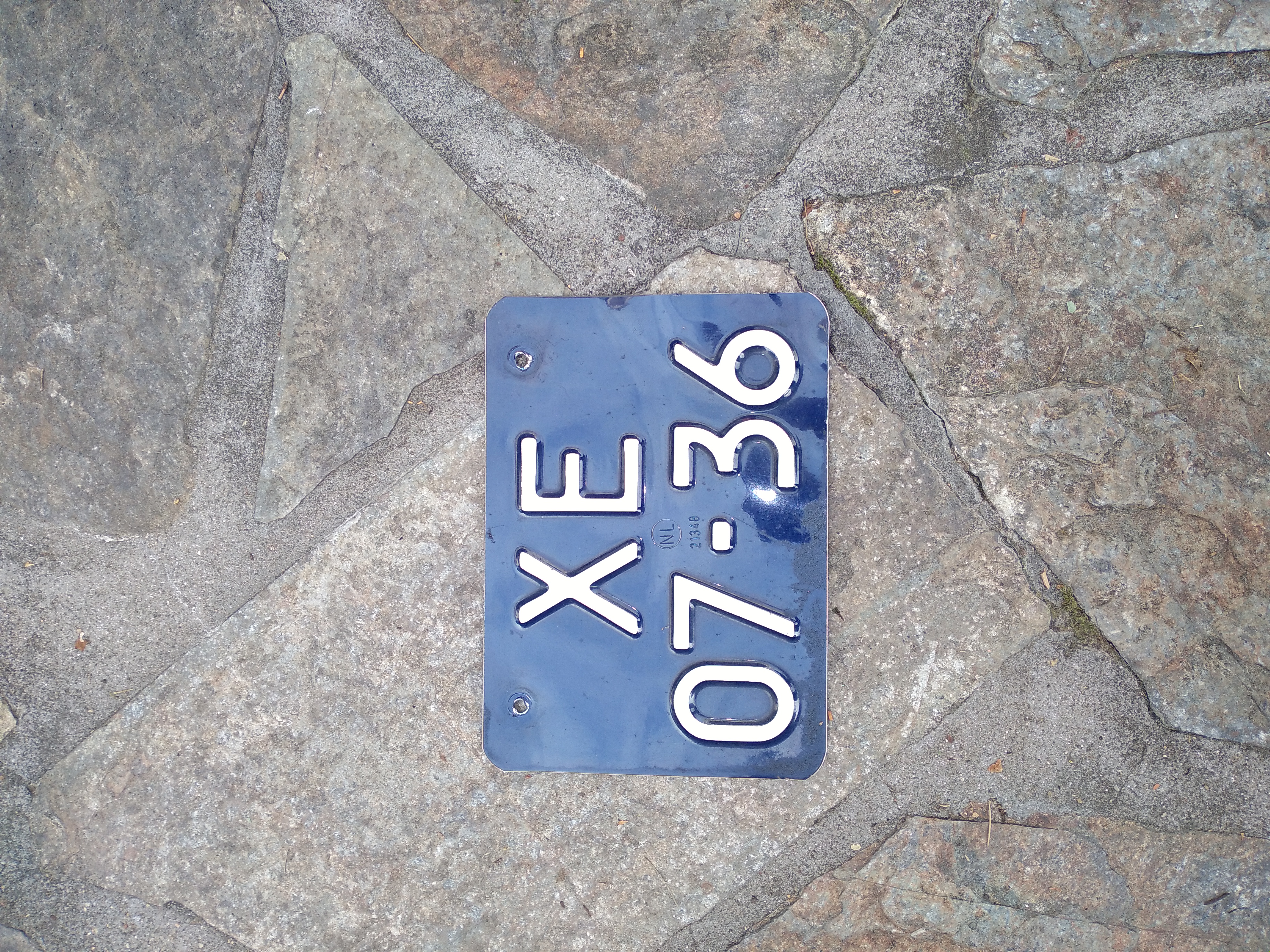 To export, the original license plate along with the motorbike’s original papers need to be restituted in exchange for a proof of ownership and export document. A painful moment, I would have preferred keeping the license plate as souvenir which had been hers for 50 years. But also because this was my dad’s initial and original plate. But as I feared, though they understood well, they couldn’t make any exceptions. Saying I lost the plate or make a duplicate wouldn’t work; they are old plates but also marked.
On the bright side, once exported, there is a grace period in which the motorbike is still allowed on the road; 14 days from the moment of export. This is done to offer the possibility to drive the vehicle to place of destination after the export. To do so, it needs to have a white license plate with black markings and a valid insurance. 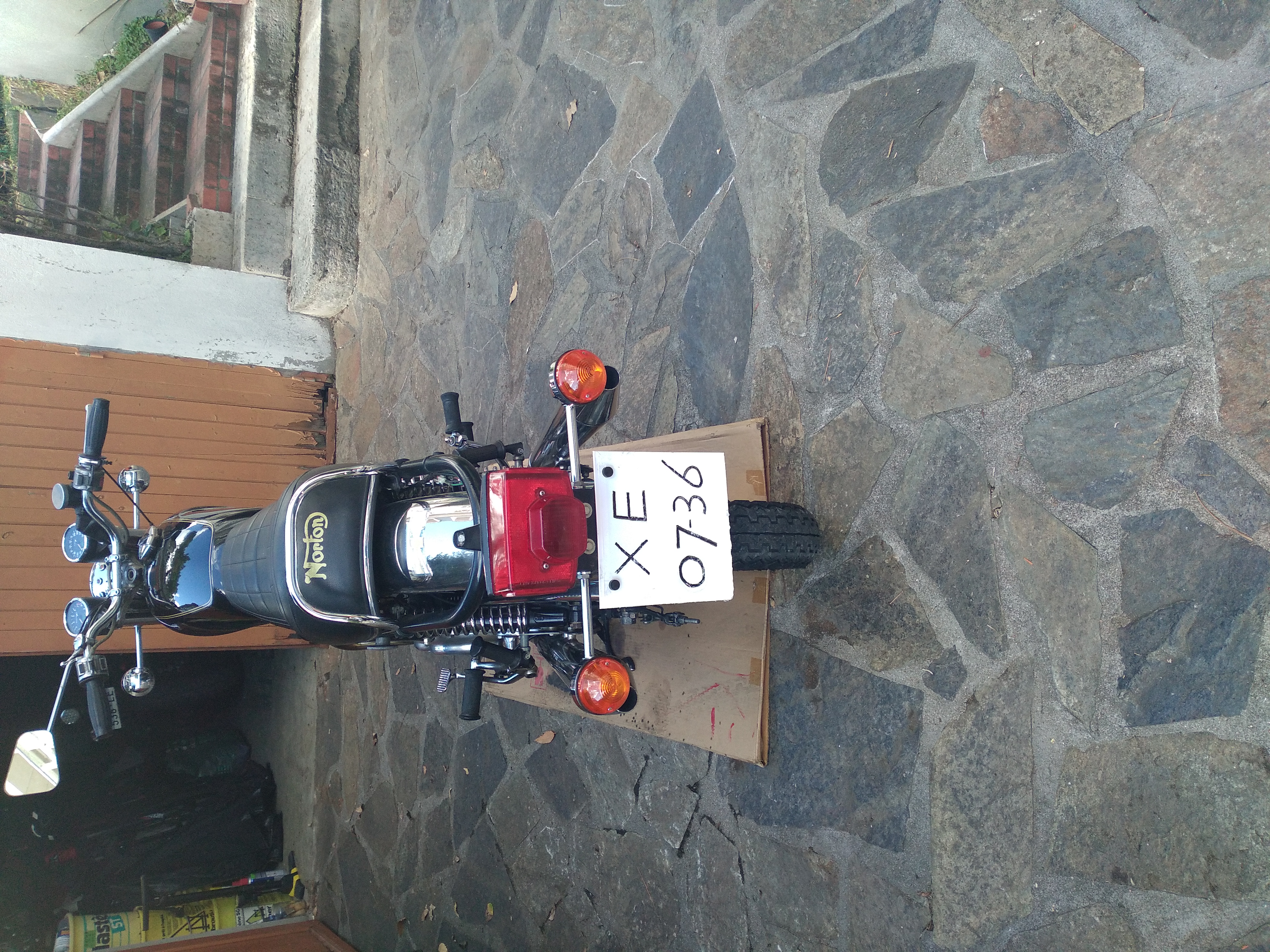 Though the Norton had been "at destination" for 14 years already, I could still make use of it; if ever I would get pulled over, well, I would just exactly and by coincidence almost had been at destination. I have only been able to use this once, as dear mom didn’t catch this and she ended the insurance already 🙁
To start the import procedure, I already have a proof of conformity from the Norton Owners Club France for my Norton (thanks gentlemen !). But the French ANTS is actually asking for a proof from FFVE; the proof of conformity delivered by the NOC France may or may not be enough. Then as well also start a procedure with the FFVE. As they request, I had taken beautiful pictures from all angles, including close ups of the Norton’s serial and engine numbers. But as I read on, it was written that a current-to-day newspaper needed to be present to be able to authenticate the date on which the pictures were taken… grumble … So I had to re-take some pictures, including a newspaper.
Yes, I know, especially in such cases one should always pay attention to read the tiny letters as well… 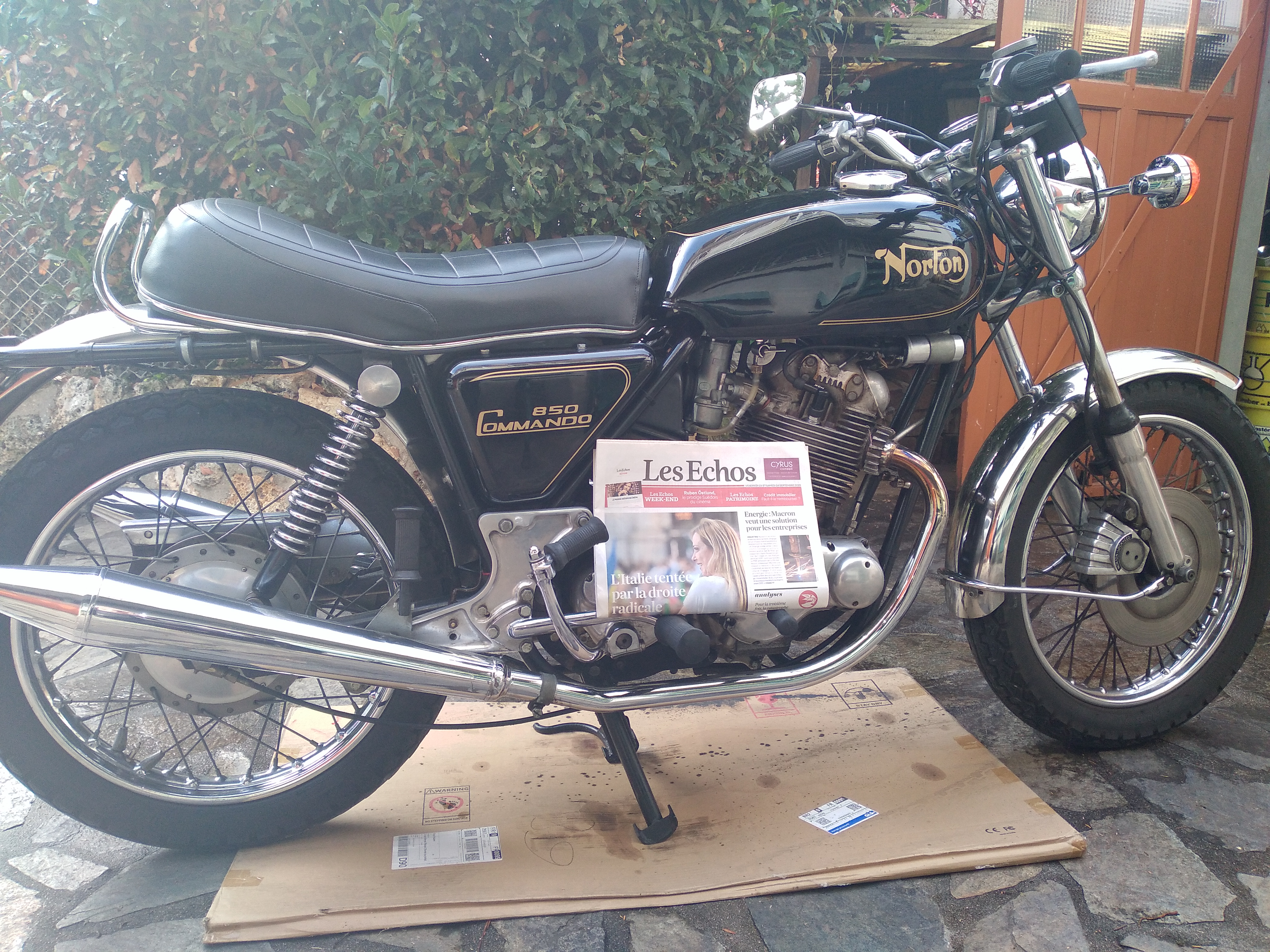 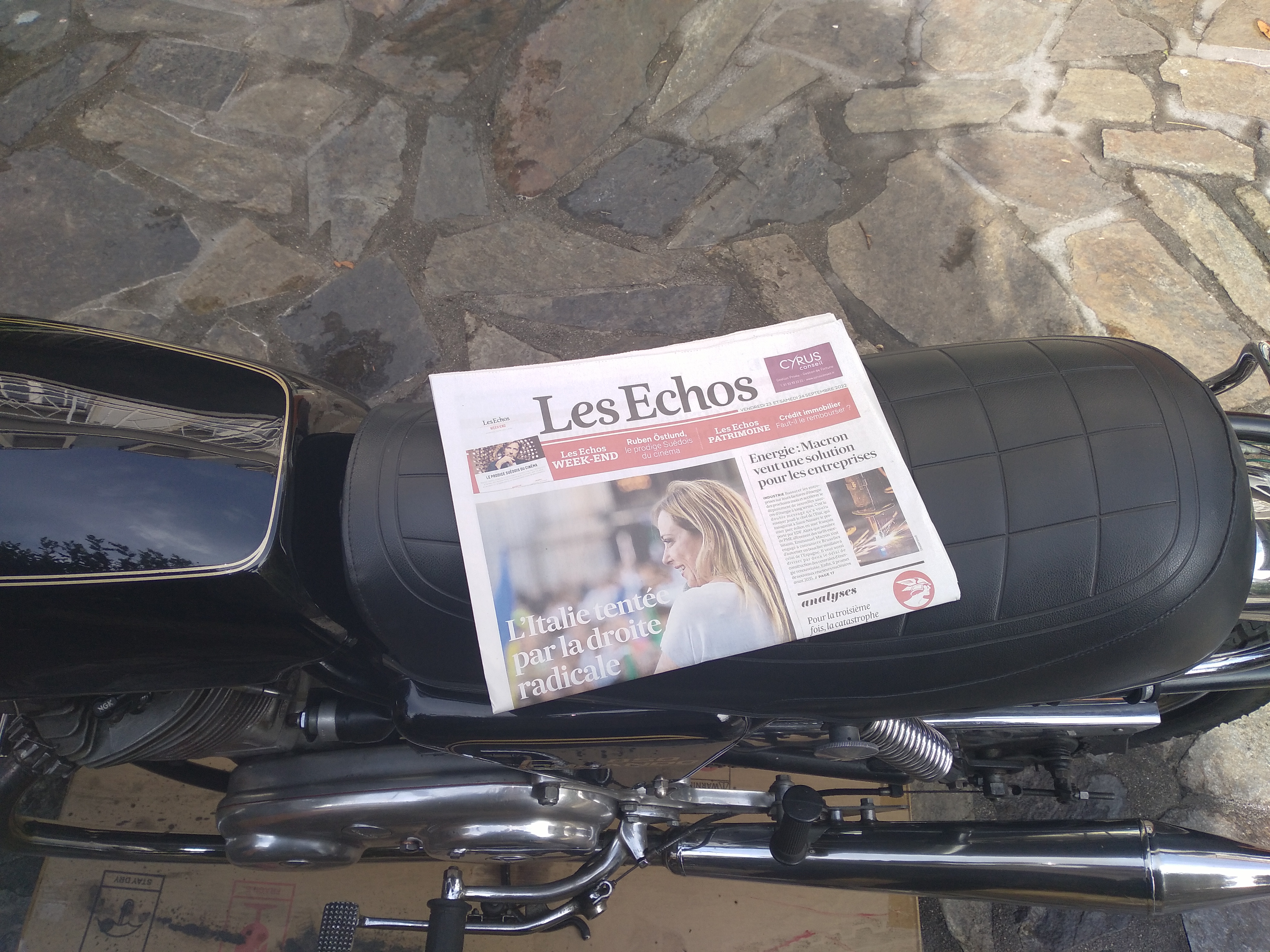 The request for proof of conformity has been made to FFVE, who acknowledged reception, now all we can do is sit and wait ….
I could call for a donation … If someone could send me a pluche animal, so I could cry on it while I can’t use the Norton during this time … 😉

No, I’ll probably use this time to perform some extra maintenance.