Yes, finally, my holidays have started! 3 weeks ahead but well, it looks like summer ended already before it even started; we had some nice days end of june and start of july, but since then… Weather su*ks. Even today, while leaving with grey skies, it started to rain again. So I’ve used my time to look some things over. Since a couple of weeks, the Norton’s taillight doesn’t come on when braking. It works for the rear brake, but not for the front brake. Which is kind of stupid, as I more often use the front brake while just barely, or not even, touching the rear brake. 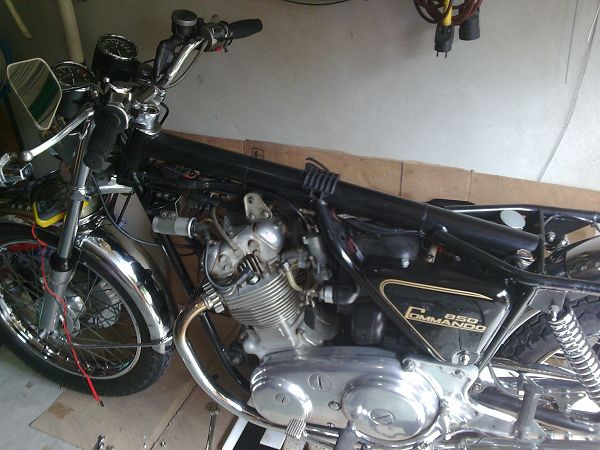 I’ve followed the wires, from what I can see it is the brown wire, taken together with the red indicator light for the alternator in the headlight shell, followed it under the fueltank but.. Nothing. I didn’t find it (yet). Unless the switch itself on the handlebar is defective, I already changed the switch on the rear brakepedal once, but the front brake is quite well protected. Oh well, I still have 3 weeks left, I’ll find it 😉 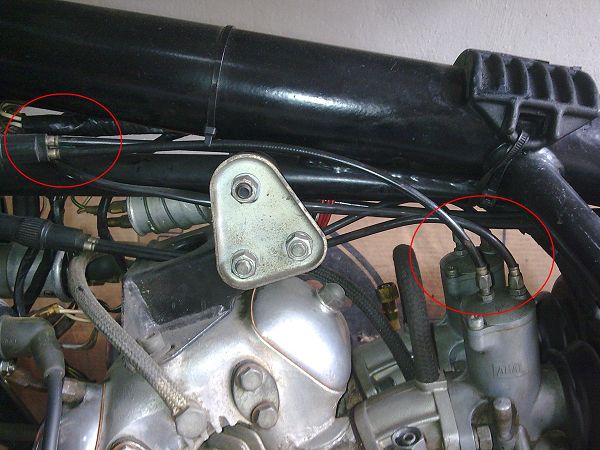 Slack in the gas cable for the right amal carburator

The slack, compared to the left, was about 5 mm. By adjusting the cable on the right Amal, both react at the same time. Meanwhile it stopped raining, so I put everything back together again, the fueltank, the buddyseat, the headlight and changed the spark plugs; last time I put in brandnew Champion spark plugs. Maybe coïncidence, maybe not, but the Norton was more difficult to start. When I removed them and put back the NGK Iridium sparkplugs that I cleaned, the Norton started on the third kick. The modification by removing the slack on the gas cable could be noticed; when opening the throttle for acceleration, there is no longer the moment of “hesitation” and the Norton runs a bit better too at low engine speeds (2.000 – 2.500 rpm), less “jerky” while riding at a constant speed.