Laurent from Machines & Moteurs called me tonight, the Norton is ready 🙂

All went well, engine pieces are put back together again (I hope they didn’t do like me, I usually find myself with some “spare parts” left over once all put back together again). He told me that they found two things to look at; the clutch slips (but that I already noticed, how could one not notice it?) and he told me something about (re)tightning something after 50km, but he told me he will explain when I go pick up the Norton. Luckely, because to be honnest, I already forgot what exactly he said. It is not that I don’t understand quickly, it is just that one has to explain for a long time. Inside joke of course but then again, I’ve always been more visual orientated than textual; if I see something, I can do it. If one tells me something, they may need to repeat it a couple of times before it sinks in.

The clutch will have to wait a bit though, at least untill after I got my 13th month paycheck. Perhaps towards the end of winter. I know it needs replacing, but I’m not asking much from my Norton and ride it more like a grandpa on a sunny day. To replace it, I’ll take the Norton back again to Machines and Moteurs, I still prefer to pay a bit more and have it done professionally than trying myself and break things. Also because, if the clutch would break, I have no other means yet to transport the Norton.

For the moment I’m already quite happy with the work done on the exhaust fixation, the first “big” work of a long series of things that need to be done towards a more reliable Norton (clutch, primary belt drive, electronic ignition, ..). I’m not in a hurry, I’ll get there 🙂

Well, what can I say? My holidays are running towards their end and I can already hear my job start calling me… Today is the last day of my holidays, tomorrow morning early the alarm will sound again and we’re going back into every-day routine. On top of that, the last past days were sunny and dry, a bit fresh in the morning, but lovely during the day. But… 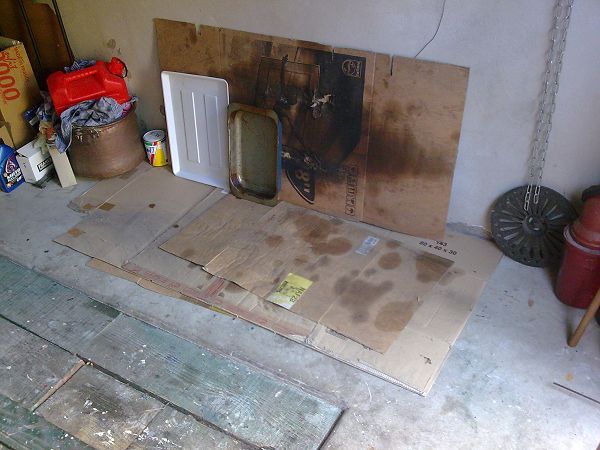 I sent an email to Machines & Moteurs last week. After some thinking, I’ve asked them to repair only the right exhaust thread which seems a bit stupid; as they need to take apart the engine (and hopefully rebuild it again) which takes more time than the repairs itself, I could as well ask them to do both left and right exhaust threads at once. The left one still holds (a bit), better than the right but I can only imagine that it is a matter of time before the left side starts giving problems too. With both exhaust threads done at once, they shouldn’t give me any problems for at least a while. Now I hope only one thing : when the Norton is done and I can go pick her up, that it won’t rain 😉

Yesterday I’ve asked my father-in-law to have a look at the exhaust locking nut and balance pipe, too. Sure, he arrived at a respectable age, but even to find the right N° 10 wrench and figure out if he should turn it clockwise or perhaps better anti-clockwise took him over half an hour. Once back home my wife asked me if it didn’t occur to me that perhaps he was taking his time to make it last longer, because he loves spending time with me? Bottom line, there is not much left to do; tighten the balance pipe collars to keep the exhaust pipe in place was a bad idea anyhow, the mean problem is that damn exhaust locknut and without it, besides the fact that the Norton passes air and creates after ignitions in the right muffler, it swings out too large, such way that the kick starter touches the right muffler.

Today I rode the Norton to Machines & Moteurs while my father-in-law followed me in our car. Through time, I’ve heared good things as well as less good things about this workshop but fact is, they have a lot of work and machines to work on in their shop, so I can only figure that if they would not do a good job, they wouldn’t have a lot of customers, but as they do have a lot of customers… I guess they must be doing quite a good job with english motorbikes. Yet I had a little surprise. Before deciding to proceed with removing the thread and place a new one, I did check some prices. Where I didn’t think about, is that the quoted fees are really only for the work of replacing the thread! Meaning, if you would take the engine apart and bring only the cilinderhead. As I brought the whole bike and they will have to remove the cilinderhead and camshaft (and put it back together), it is additional. In fact, time spend on doing this is way more expensive than the requested work itself! They quoted me a price that scared me at first .. But then again, I don’t feel much for taking the engine apart (and rebuild it) myself. After all, I’m a computer specialist, not a bike mechanic! The given quote is roughly 700 euros over what I estimated but then again, it needs to be done anyhow.

I did call my wife, discussed it, but well, it is my bike and my money, what could she say? I start to get a new feeling about the expression “you bought it, you learn how to fix it”; it isn’t because Nortons are breaking down so often, it is simply because if all workshop repairs are that expensive, one won’t go far not leaving much choice than doing things themselves 😉

At the same time I got new info about my Norton; I went to Machine & Moteurs a couple of times before, but this was the first time they’d actually seen my Norton. It appears that the repaint job has been done quite nicely and she looks to be in good shape. They also explained me that my Norton is a MK1A model, though I admit that it was a bit confusing to me. The engine and frame numbers match, though I don’t remember how they matched them, but there was some confusion about the make, model and year which didn’t seem to match the serial numbers, as she has engine number 306640, an airfilter box that was used as of 306500 on later ’75 and MKIII models. I don’t know and couldn’t tell. To all I know is that my dad bought the Norton start of ’74 and it is supposed to be a ’73 model, but from old photos I’ve seen the Norton with and without airfilters, with and without stearing damper, with blackcap mufflers and dragpipes, with different mudguards, with different fueltanks and different buddyseats, with stearing bars and clipons, with normal suspensions and koni’s … The Norton had many “outfits” and my dad changed her regularly in function of his moods. But as what she looks like now, exactly now though being in black/gold as opposed to red/white colors and having peashooter mufflers rather than the blackcaps, that is how I remember the Norton as “original” and how she looked like in photographs taken in 1982.  To make a long story short, the airfilter I purchased earlier is indeed not the right one for this model, they will exchange it at the same time.

The Norton is likely to stay 2 or 3 weeks at Machines & Moteurs and my wife asked me how I’m going to survive without my Norton? I don’t know, open some old oilcans and snif the smell of oil to remember her?? LOL