This afternoon I went a bit early to see the Norton. I knew that I still had to look at the right exhaust locking nut. When I removed it, I could see that the sheet copper had done a good job but didn’t resist to the vibrations and force of the Norton after all.. 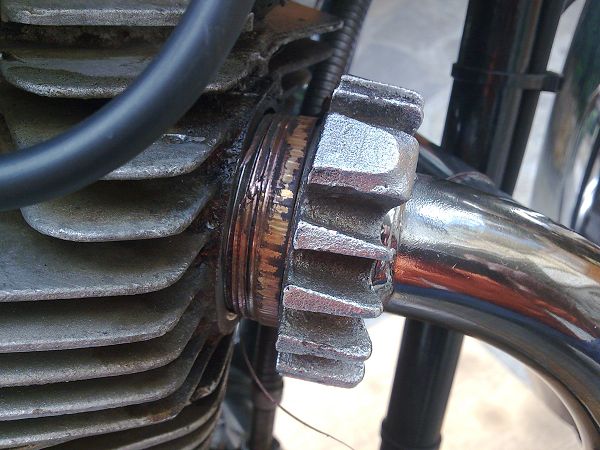 What is left over of the sheet copper

The threads were well in the sheet copper, they even cut through the sheet copper and I had to remove it in fine, thin parts. None the less, it held firm for one year and allowed me to ride the Norton around a bit. I’ve proceeded same way as last time; cut a small strip of copper, put it on the thread, make sure it enters neatly and tightened. We will see how long it will hold again.

To heat the engine up and tighten a last time, I took the Norton for a short ride and when I was in Boulogne on the quai de seine, I saw a biker pushing his bike in the opposite direction. I turned around at the next trafic lights and pulled up behind him. I had my backpack with me with my tools (just in case the Norton would die on me) so perhaps I could help. He explained me that the battery was completely dead as was the battery of his cell phone to warn his friends. I offered him to use my cell phone, but he told me that wasn’t necessary because he was almost there, just left on the next crossing. Hum… Yeah, but “the next left” was in a couple of kilometers.. I don’t know, I could have offered to swap batteries, after all, the Norton can do without, or I could have pushed him, or … But he told me not to worry and he was doing fine.

Strange … I had to push the Norton several times and I can’t realy say that I enjoyed it, so why would someone else push his if it could be avoided? When I came home and told my wife about my afternoon she said “you’ll see, he wanted to push and I’m sure that some 10 minutes later he must have been wondering why he didn’t accept to use your phone”. Oh well, I can only offer help, can’t force someone to accept it if they prefer to continue to push their bike. 😉